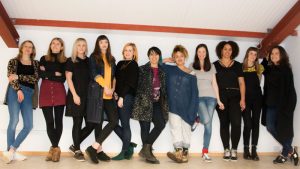 Bristol’s music scene is a popular one. Respected worldwide for its wide range of genres and influences, its output is both diverse and varied. Unfortunately, though, it’s still heavily male-dominated – both at the forefront and behind the scenes.

Bristol Women in Music want to change this, as a collective of women in the music industry coming together to help educate and encourage more women into the music scene – as well as supporting those already there. In Stokes Croft’s Attic Bar I asked Naomi Jeremy, one of BWiM’s 11 members, about the impetus behind Sound Industry, their first annual conference to be held at Colston Hall at the end of March.

“We wanted to put together an annual conference celebrating women – and men,” she laughs. “Very important, that last bit! We did want to centre a majority of the bookings on women in the industry, because a lot of industry conferences or festival lineups have just one or two women representing. Up until now we’ve been running networking events and organising introductory Mix Nights for women who want to learn how to DJ, which have gone down really well. This is our first main conference that we’ve run, though, and we’ve got a really interesting day planned – four panel discussions, three workshops and a keynote speaker.”

Sound Industry welcomes all those interested in music and the industry, aiming to challenge and inspire individuals working all over the South West, and inviting some of the UK’s leading industry professionals to explore all aspects of the scene. Respected DJ Jamz Supernova, who organises regular music nights in London and hosts her own show on BBC Radio 1Xtra, has been announced as one of the keynote speakers. This makes her an excellent choice to provide insight on how to navigate the many facets of the music industry.

Fellow BWiM member Jenna Wade outlines the drive behind the event. “Too often, the music industry can feel like it is directed at (and run by) a very narrow demographic of people. Sound Industry’s mission is to represent something more diverse. The programme has been curated to offer a platform for lively debate and fresh ideas that will equip and challenge both men and women. In addition to examining the business side of careers in music, Sound Industry will be looking at the profession from a human perspective, covering broader issues of musical diversity, equality, wellbeing and politics.”