I cannot believe how long it’s taken me to write about Love Saves The Day. In my defence, I was up in Birmingham getting job training for the  month and only managed to shoot back for the long weekend before going back again – the fun never stops!

I have to say, I didn’t manage to reach nearly enough on Saturday purely because I was working/knackered, but I did go down to get a lay of the land and prep my bearings. Had I of been attending as a punter, I wouldn’t have bought a ticket for Saturday…and that would have been a mistake. Although Sunday had more of my kind of music in the billing, the vibe was undoubtedly better on the Saturday.

People generally felt a lot more willing to talk to strangers, possibly because a lot of the people I spoke to were from out of town and were there just to get involved and see where the day took them. Many a wedding was had at the inflatable circus. 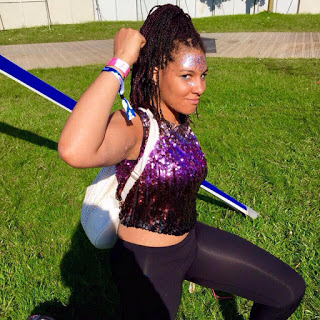 Sunday was the one though, I can’t lie. Sunday was Bristol’s day – maybe that’s why the vibe wasn’t quite so happy/hype – because everyone knew each other! For me Sunday standardly started with a ‘shit/fuck/bollocks’ moment from myself. I’d been invited to back Eva Lazarus with fellow Afronaught Naomi Jeremy as part of the Jus Now set.

For anyone that knows me, I am late to everything. So I arrive with twenty minutes until Jus Now takes the stage and I’m standing in the guestlist que which is NOT moving. Now, I only have myself to blame so I can’t get toooo pissy about it but what upset me was that the general tickets que was speeeeeding past. When I shout conversed with friend much further up the que than me and explained I had to be on stage in what had ticked down to twelve minutes, she grabbed the first steward she saw and I was in! Thank you Gillian McKenzie – you are my saviour!

So, I ran to main stage and arrived sweaty and breathless – PERFECT conditions for singing. It was SO much fun though. The audience swelled from 40 to 200 at least in the space of ten minutes. On. Point.

acts I was seeing. It was exhaustingly exhilerating and I had no idea I was knackered until I hit a wall at 3am in the middle of motion. Body. Spent.

Here were my general notes for anyone that cares…

Introduced to them by Eva, they are AMAZING. Even better, Miss Jess Farley glittered me up proper festival stylleeee – Blue Avatar vibes. Babe. Check her Instagram: @jessfarley

Haven’t seen this guy in a hot minute apart from when I’m watching Game of Thrones with new people and happen to ‘causually’ drop into conversation, ‘Oh yeah that’s Jake, I went to school with him’. He is kicking ass, taking names and still an absolute sweetheart. The energy he gave on stage was wicked, when a musician also manages to be a performer the audience connects with it so much more and woiii – peeps were going ape. Girls screamed like their lives depended on it when he jumped off the stage. Lols.

You know there are those DJ’s and you know you must have seen them before but you’ve got no idea when/why/what music they played, you just remember it was a good time. This can be due to overindulgence… Well, I know about this guy now, soon as he started playing I was like Oh yeeeeah, he’s fucking siiiick. It’s all coming back to me! Banger after banger got dropped on the old skl garage/grime/erryting worth listening to spectrum. Bossed it. That was the hardest I skanked out all day until I was shuffled out of backstage for the arrival of Skepta. Peak.

Now I can’t lie, I didn’t watch Skepta live because the crowd was SO TIGHT I chose oxygen instead. But I did see him before the show when we were all skanking to DJ EZ and he looked in high spirits. Gun fingers, smiles and laughter from his crew – it’s always nice to see someone genuinely enjoying the vibe.

This is who I chose as my nights headliner and didn’t he disappoint. The bangers that you expect executed well. There was a variety of genres and the crowd was as responsive as you’d expect. I’ve been a fan of Redlight from long time so there’s not a whole lot I can say except, he’s wicked. The set was live and it prepped me well for the next chapter of Motion.

Motion passed in a wave. Don’t ask me about that. So yeah, LSTD essay in it’s fullest! Can’t wait for next year – Eastville park is a perfect place for it, I only hope the residents weren’t kept up too late and all the hippy crack got cleared away before it went back to being family friendly.

‘General vibe’ interviews/discussions to come. I’m collecting over the summer and will be putting them up as a a series as remembrance to get us through those winter months…