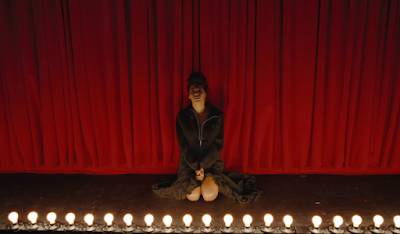 Pray You Catch Me

The album opens with Beyoncé looking down with graffiti in the background, presented in fur and corn rows. A vulnerable admission of infidelity begins: ‘I’m praying to catch you whispering, I pray you catch me listening’ As the word ‘intuition’ comes up on the screen Warsan Shire’s words spoken by Beyoncé.

‘You remind me of my father, a magician.

Able to exist in two places of once.

In the tradition of men in my blood,

Shire’s resonant words weave each song together making the album unbearably intimate at times. It adds an inescapable depth of every day endurance that women of colour experience. Adapting the self to a world that doesn’t accept easily or graciously.

‘I tried to change. Closed my mouth more. Tried to be soft, prettier, less awake.’

The sunshine reggae vibe of this song comes from an Andy Williams sample from the 60s and the chorus is a rework of “Maps,” sung by Karen O of the Yeah Yeah Yeahs. It is hypnotic. Beyoncé’s familiar, unassuming smile etched into her face while she smashes up cars on the street with a baseball bat.

It’s an easy listen and fun to watch but the music does become monotonous. Saying that, as is the case with the whole album, it’s not really about the music but the words.

Or mastered wealth, they never had you labeled as a king

You never made it out the cage, to locked up, movin’ in the streets 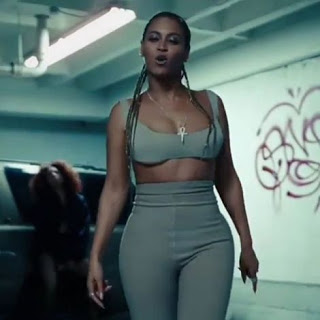 Led Zeppelin are sampled in this Jack White collaboration. The immediate, driving drums from ‘When The Levee Breaks’ takes it to next level swag with Beyoncé growling over a filthy bass:

‘Who the fuck do you think I am?

You ain’t married to no average bitch boy

You can watch my fat ass twist boy

As I bounce to the next dick boy’

The layers peel back with a Malcolm X sample:

‘The most disrespected person in America is the black woman.

The most unprotected person in America is the black woman.

The most neglected person in America is the black woman.’

The edge sharpens as she unashamedly inhabits the angry black women; looking at the camera with pouting lips and snarling, ‘I’m just too much for you.’

This could be a wife saying it to her husband but it could also be any disrespected black woman saying it to the world where descriptions like ‘ghetto, loud, opinionated and sexual’ have been used as weapons against them.

Watching Serena Williams, a fantastic athlete whose aesthetics have been mocked time and again, expressing her sexuality in this video is glorious. She smiles and twerks, swapping roles with Beyoncé who sits stoically in a chair singing ‘I ain’t sorry’.
Black women are rarely allowed to own their own sexuality without it being drenched in animalistic shame or constant comparison.

‘He only want me when I’m not there.

He better call Becky with the good hair’ 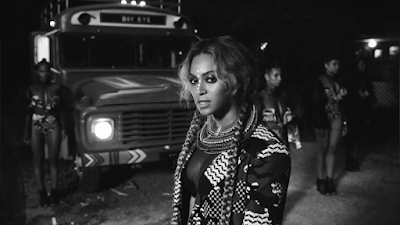 For me, this is the most important line in the whole album. Forget who Becky is, she is irrelevant. So is the affair. The symbolism of this line being sung whilst drenched in symbols of Africa is poignant.

‘Becky with the good hair’ is every billboard that women of colour see advertising Western beauty as the epitome.

It is every time I go somewhere and someone feels the need to mention or touch my ‘interesting’ hair. It is every time someone approaches you only to inquire about your skin colour, your sass, your Nubian twist. It is the everyday microscope that magnifies your difference. 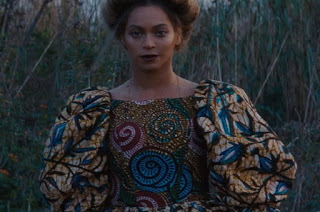 Beyoncé’s foot tapping, ye-hawing country/blues debut starts in New Orleans and ends in her hometown, Houston. It is the only song on the album she produced solo, co-written with Wynter Gordon, Kevin Cossom and Alex Delicata.

Daddy made a soldier out of me.’

Singing in West African print along rhythm guitar, the song speaks of complex family relationships. It shows how the expectation to be strong and independent starts at home and is carried on through generations where we fail to avoid picking our fathers.

This short, poignant collaboration with James Blake is truly heartbreaking. It features grieving mothers Sybrina Fulton, Lezley McSpadden and Gwen Carr who hold portraits of their passed sons, Trayvon Martin, Michael Brown and Eric Garner. It drives home the dark reality that we live in this world, that our black children are not safe. 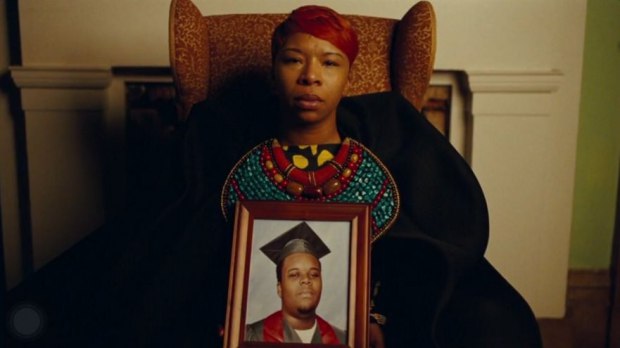 A gospel collaboration with Kendrick Lamar that samples 60s band Kaleidoscope to psychedelic affect, this is the albums’ ear-worm.

‘I break chains all by myself

Cause a winner don’t quit on themselves’

Supermodel Winne Harlow said of working on the project:

“(Beyoncé) sang acapella with the courage of our ancestors who worked the grounds we were celebrating them on.”

Filmed on a plantation with women of all different shades of brown dressed in Victorian clothing, this song celebrates the generations of strong black women who have come before us and will come after us.

It is an intensely emotional part of the album with French-Cuban soul duo Ibeyi and actresses Zendaya and Amandla Sternberg standing with the grieving mothers of the Forward.

It shows us the journey we endured together as a people but passes on home to the next generation. It cannot help but leave anyone feeling informed, aware, awake. 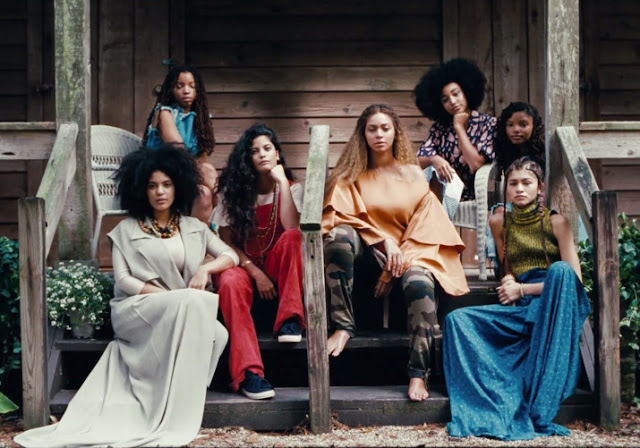 The cynical part of me accepts that Beyonce knows what she’s doing. When Formation dropped at the Super Bowl (the ultimate in capitalism) I questioned the timing as well as the intention. This isn’t groundbreaking musically – the prominence lies in a specific message for a group of people to stand up and be proud. But then Lemonade tour tickets went out at £80+ each….pretty steep for the supposed target audience.
Despite this, Lemonade (which is still on repeat) is about much more than a man cheating on a woman. It digs deeper to how the world sees black females, and tells us to be stronger than others. Standing together, that strength can make us more fiercely capable than anyone.